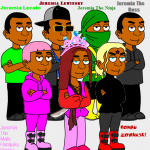 Jeremia Lecato (Born July 2, 1999, in Camden, NJ) better known as Any type his alter egos' names or Psycho Boss or Any nicknames after the first word psycho is an American R&B, pop, and hip hop recording artist, songwriter, dancer, YouTube personality, scientist, and student. Lecato lives in New Jersey, he begans to sing and rap with his own music, he's sings with some 2000's R&B and soul beats just like the other female R&B singers such as, Beyoncé, Aaliyah, Ashanti, and Rihanna. He is also a reggae and dancehall head because he is Afro-Caribbean. Electronica is a type of techno, but Lecato's electronica confuses with electronic dance genres such as, electro house, EDM, and synthpop. Most of the day, Lecato listens to pop music, which is his first and favorite music that he sings, is dance pop music. Lecato is also a pop singer and pop rapper, he sings and raps dance songs, electronic songs, and pop songs.

Just like Theresa, he is the only member who doesn't swear that much and uses harsh language, until the past videos he says "hoe". Until the late videos, Lecato starts to curse when he got pranked.

Retrieved from "https://psychokid.fandom.com/wiki/User:Jeremia-Lecato?oldid=30553"
Community content is available under CC-BY-SA unless otherwise noted.