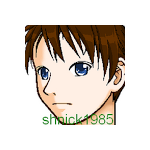 I also have a YouTube channel called shnick1990, where I usually upload Let's Play videos daily alongside occasional game reviews, having obtained more than 200 subscribers and over 100,000 total views, likely because I've mostly began to focus on movie and TV licensed games, as I want to combat the stereotype that all of these games are bad. But trust me, I've run into quite a few bad ones nevertheless...

Retrieved from "https://psychokid.fandom.com/wiki/User:Shnick1985?oldid=86763"
Community content is available under CC-BY-SA unless otherwise noted.